In the vineyard: The Oxney terroir 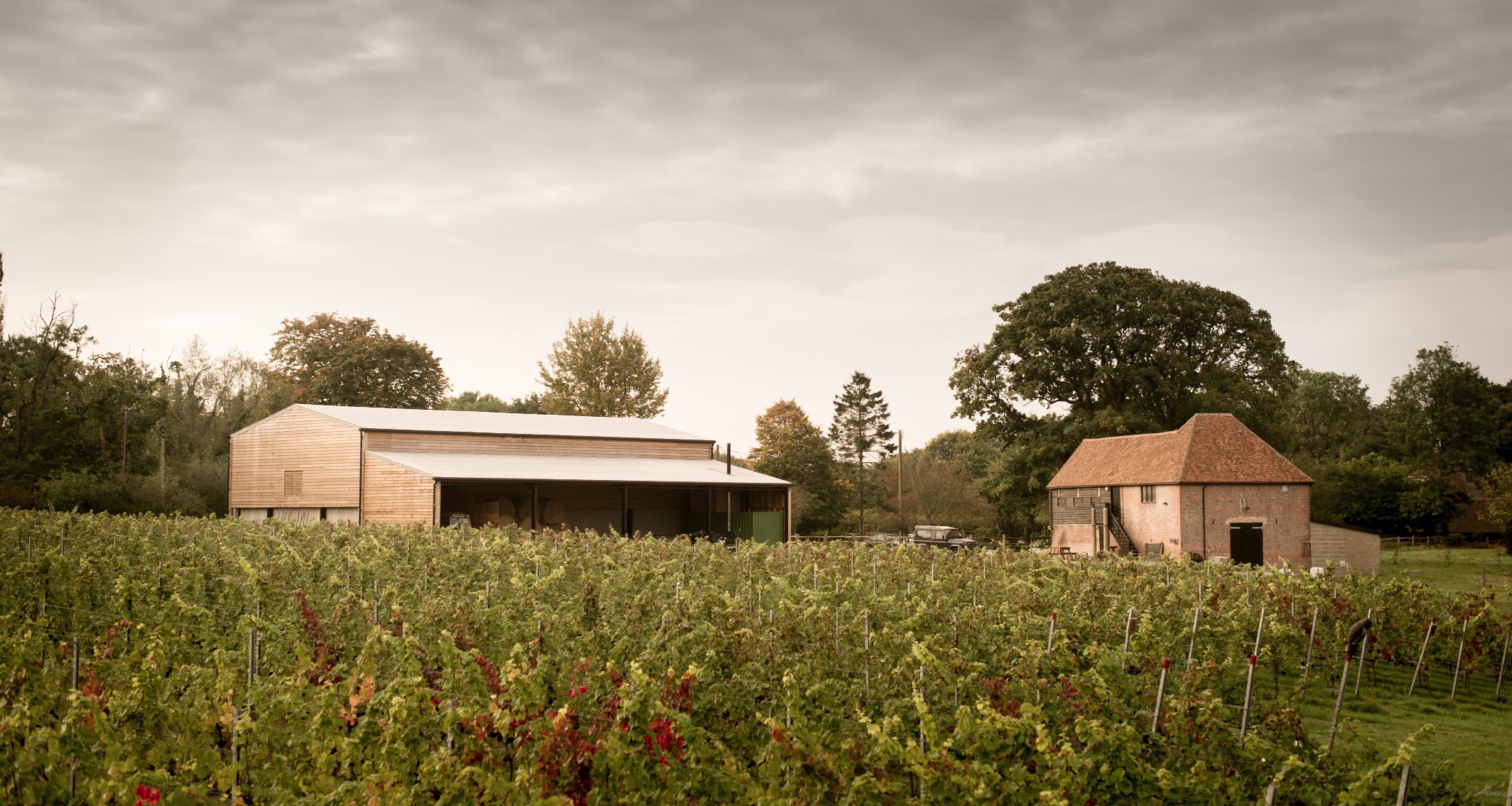 Schadenfreude. Hygge. Kvell. Sobremesa. There are many words from other languages whose meanings are so nuanced they defy translation into English. But do any of them cause as much conversation – or consternation – as terroir? Certainly not in the wine world, which has been discussing, dissecting and debating the topic for centuries.

So what exactly is all the fuss about? What is terroir and why does it stir such passions in wine circles? We can’t claim to have the definitive answer – terroir is, irrespective of its translatability, a slippery concept. But having been on our own terroir journey since starting the Oxney project, we wanted to contribute our thoughts on the subject, specifically in relation to our own terroir and how it affects the wines we make. Here goes…

In its purest sense, and indeed in its literal translation, terroir is a French word for land or soil. It began to be used by French winemakers centuries ago as an explanation for why different regions were able to produce very different wines, even from the same grape varieties. This viticultural quirk has been acknowledged for millennia – winemakers in Ancient Greece would stamp the region of production on amphorae and reputations were made and broken on these names.

However, it was during the Middle Ages, in the winemaking monasteries of Burgundy, where the concept of terroir really took root. The monks observed the influences of different parcels of land on the subsequent wines and began to plot them out into distinct terroirs. Many of those boundaries still demarcate the Grand Cru vineyards of Burgundy today.

For these early terroir pioneers, soil really was the secret of the individuation of their wines (to the point where they were reputed to have tasted their soils for clues). In the centuries since, terroir has expanded to cover far more ground. Today, terroir is used to refer to the subtle interplay between all of the factors that make up the natural growing environment for grapes. Beyond soil composition, that means things like which direction the vines face, whether they’re planted on a slope, the natural elements they’re surrounded by and numerous climatic influences like proximity to the coast, air humidity and direction and strength of wind.

When all of these factors are interlaced in a vineyard, what you effectively get is a unique ecosystem not just for every parcel or row of vines, but for every vine. This is the essence of terroir… but what effect does all of this actually have on the resulting wines?

The answer to this question is hotly contested. Terroir sceptics deny that it has any effect at all, that a combination of winemaking wizardry, marketing bluster and credulous consumers are enough to explain the perceived differences. And in truth, nobody has yet mapped out precisely how the factors influence the wines. There are romantic notions that wines literally imbibe minerals from the soils in which the grapes were grown, so that coastal vineyards produce saline wines and vines grown in rocky soils taste flinty. Yet there is precise little science to back this up. What’s more, there is undeniably some commercial interest vested in the idea that wines grown just inside a Grand Cru boundary in the Côte d’Or merit exponentially higher prices than those grown on the other side of the hedge.

For us, even acknowledging all of this isn’t enough for terroir to be explained away. We’ll admit that we used to be terroir sceptics ourselves… but then we started making wine and couldn’t deny that something happens in the transformation of grapes to wine here at Oxney that doesn’t happen anywhere else. If we can’t quite put our finger on what that transformation is, we can at least wave a hand over our vines to pick out some of the components that we think define our terroir. 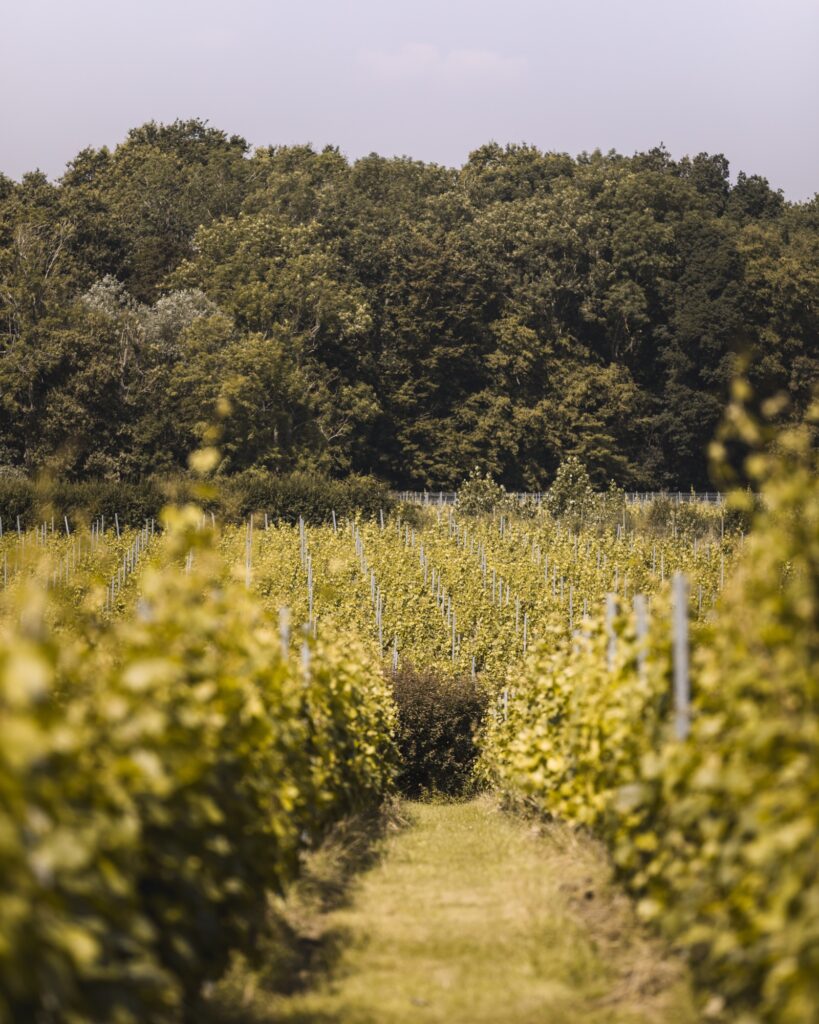 Digging into the Oxney terroir

We think we have the perfect conditions for growing healthy grapes to the peak of ripeness in the UK. We would say that of course, but there are a number of natural factors in our favour when it comes to our terroir. The most important are our local climate, the slope and aspect of our vineyard, our biodiversity and (naturally) our soils.

Our prevailing local climate enjoys several natural advantages. Being in the UK’s sunniest county, Sussex, certainly helps. So does growing our vines so close to sea level, since altitude = lower temperatures which, in the cool English growing season, would inhibit ripening. Our relative proximity to the sea is useful too. We’re not close enough for our vines to be cooled or battered by winds coming off the Channel, but we do benefit from gentle breezes, which keep air circulating through the vines and help to reduce disease pressure.

When we drill down to the level of microclimates – the conditions surrounding each and every vine – things get really interesting. The vineyard is actually a patchwork of microclimates, with some patches getting more sun than others, some warmer, some more humid, some more sheltered, some more exposed to wind. These climatic conditions interweave in the most unpredictable ways to mean that certain varieties, and even different clones of the same variety, grow better in certain plots than others. Subtle variations in soil composition play a big part in this, but what’s happening above ground is a major influence too.

Growing grapes this far from the equator, we need to expose our vines to as much sunlight as possible. In our little corner of England, south-facing vineyards are the key to this. Vines tilted towards the south soak up maximum solar radiation through the day, giving our grapes the best chance of ripening. Our vines are actually oriented south-west, which means they’re shone on when the day is warmest, in the afternoon.

The orientation of our vines is aided by the gentle slope of our vineyard from north-east to south-west. As well as helping the vines to soak up a bit more sun, it also encourages drainage, which stops them soaking up too much water. Plus our slope affords us a little extra protection from the perennial English peril of spring frosts. Since frost rolls down hills and collects in pockets at the bottom, new buds on vines planted uphill from those pockets are better equipped to survive frosty nights.

Vineyard biodiversity is a relatively new thread in the tapestry of terroir. For us, as an organic producer, there’s no question of its contribution to the character and quality of our wines. An organic vineyard is way more than a collection of vines planted in a particular plot of land. It’s a living ecosystem teeming with extraordinary biological complexity above and below ground.

All around our vineyard, a sea of beneficial plants and flowers attract insects, bees and birds that can help our vines to thrive by keeping predatory pests in check. Beneath every vine, life is even more abundant with literally trillions of micro-organisms at work in the soil, delivering nutrients, water and protection to the roots. It all looks and sounds idyllic for sure, which is great for our Instagram feed, but that definitely isn’t why we promote biodiversity in our terroir. Without a balanced ecosystem, our vines simply wouldn’t grow as well as they do. Our wines would be all the poorer for it.

As we suggested above, soil is the soul of terroir. And the more we learn about the subterranean world, the more astounded we are by what’s going on down there. The ways in which vine roots symbiotically interact with the microbial life in the soil around them is quite astonishing. And of course an ecosystem this intricate is dramatically influenced by the soil composition itself – what it’s made of, how deep it is, what’s underneath it, what lives in it and plenty more besides.

No two vineyards have the same soil; maybe no two vines do. In the broadest terms, our vines sit on Tunbridge Wells sand (a well-draining mix of sand and silt loam) over clay bedrock. Every year we nurture all those busy microorganisms with compost and farmyard manure from cattle grazing on pasture land within our wider organic farm estate. So in a sense our soils are undergoing subtle changes all the time, but still with an inimitable Oxney fingerprint.

One final element increasingly being recognised as a terroir contributor is decision-making in the vineyard. Different producers make widely diverging choices around how they think their vines should be trained and tended, when the grapes should be brought in at harvest and so on.

There is no explicit right and wrong in these judgement calls but they are vineyard variations that have a dramatic impact on the style of wine produced. So if we were ever to hand over the keys to Oxney, before long the inevitable changes in vineyard regimes would make their way into the bottle. We never will of course. We’re far too attached to our terroir and the wonderful wines it produces to even countenance the thought.