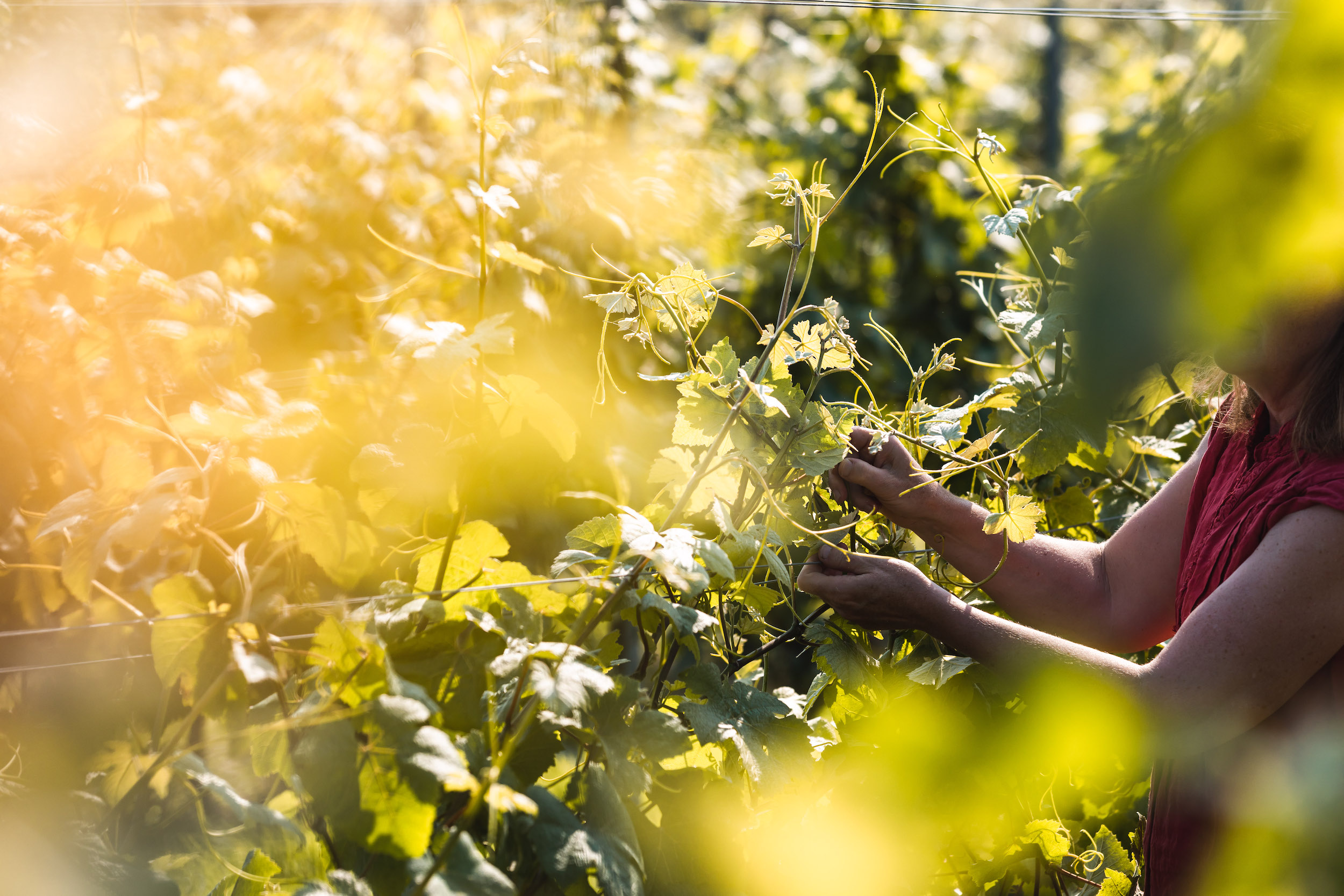 “We’re not standing on dirt, but the rooftop of another Kingdom.”
James Millton

There is an assumption that has taken root in English winemaking. It comes almost in the form of an apology. We’ve heard it many times and it goes something like this:

“We’d love to go fully organic in our vineyard. We’re spraying less and less every year, and we only spray when we absolutely have to. But with the climate and disease pressure, it just isn’t possible to make organic wines in this country.”

Every time we hear the latest version of this, our eyebrows rise a little higher. After all, we’ve been making wines organically, certified by the Soil Association, ever since we planted our first vines in 2012. A decade later, our vines are healthier than ever and our wines seem to be gathering more attention and accolades with every passing year.

We don’t say that to brag (not really our style). But as the UK’s largest organic wine estate, we feel compelled to push back on this assumption before it reaches many more ears and turns any more wine lovers against organic English wines. Because while we’re all for free debate, we’re also for informed debate.

With that in mind, here’s our attempt to redress the balance of the argument: our case for why we make our wines organically – and why many more English producers should too.

What is organic winemaking?

Organic viticulture is ultimately like any other form of organic farming. It’s an agricultural system that emphasises the need for naturally healthy soils and a balanced vineyard ecosystem to produce strong vines and high-quality grapes. In the winery, organic standards also set restrictive limits on the use of SO2.

There are strict rules on what you mustn’t use in the vineyard. No synthetic fertilisers, pesticides, fungicides or herbicides. Copper and sulphur treatments can be used in highly regulated ways to combat downy mildew and powdery mildew respectively (our own spraying regime is so miniscule it was described by one viticultural consultant as homeopathic).

The challenge of growing organically in England

The question that inevitably follows is: What do you do to combat the moulds, rots and mildews that are a perennial threat in the cool, damp English climate? Our answer is simple. An open mind, lots of hard work and a healthy dose of inspiration.

We originally chose the organic path for ethical reasons: we couldn’t bear the idea of contributing to the destruction of habitat, wildlife and soil health caused by conventional agriculture. So we did our research and quickly found that there are many natural methods for overcoming disease pressure in England’s vineyards.

Careful canopy management is key – training and trimming our vines to disperse those humid little pockets in the foliage that moulds and mildews love to congregate in. And yes, we do spray our vines. But we use bio-defences like garlic, baking powder (organic of course) and a harmless fungus called Bacillus subtilis, which basically wins the fungal battle for resources by muscling any grey-rot-inducing botrytis cinerea off the vines.

If this all sounds a little kooky, it may simply be time to recalibrate your expectations. There is a weight of scientific literature to support all of these treatments. Anecdotally, the successes we’ve seen in our vineyard are all the proof we need.

What’s more, the contrast between organic and conventionally grown vines is stark indeed. Year on year, our vines get stronger, nourished by fertile soils, surrounded by pest-controlling biodiversity and tended with observant care and attention. In contrast, conventionally grown vines lose their natural ability to fend for themselves, requiring ever more interventions to survive, let alone thrive.

In fact, we’re not entirely sure why the term ‘conventional viticulture’ is used. To us, it seems terribly unconventional to treat your vineyards as a giant game of agricultural whack-a-mole, stamping out each new problem as it crops up, often as a result of previous vine-weakening interventions. It’s reactive certainly, more convenient perhaps. Maybe ‘convenience viticulture’ is a better name.

Winning in the long run

Defeating vineyard diseases naturally is only one element of organic viticulture, albeit one that contributes to the overall aim of the organic system. The overarching idea is that the less you interfere with a vine’s natural defences and surroundings, the better it will grow in the long run, and the better the resulting fruit will be. If the vine is rooted in healthy soils, it too will be healthier. Of course, this means it requires sufficient nutrients, which A) must be in the soil in the first place, and B) must be available to the vine.

Rather than keeping our vines on life support with a cocktail of synthetic fertilizers to remedy specific nutritional deficiencies, organic farmers literally muck in with natural fertilizers and composts to sustain the microbial balance of our soils. We use farmyard manure from cattle grazing on our pastureland and mulch in the previous harvest’s cuttings, returning tons of locked-in nutrients back to the earth.

Weed control is critical as well, to ensure the vines don’t have to compete too hard for the nutrients they need. But rather than exposing the environment or our people to the indefensible hazards of herbicides such as glyphosate, we weed mechanically. This not only uproots unwanted vegetation but also aerates the soil – another vital component for teeming microbial life.

All of these methods help to maintain the biodiversity of our soils and the surrounding landscape. We manage our vines to coexist with, not dominate or replace, the biome. And it’s working. The quality of fruit we bring in at harvest, not to mention the wildlife we see in the countryside around us, shows us how well.

Perhaps the oddest idea to spring up around organic English wines is that it’s a choice made not in service of quality, but at the expense of it. The belief is that England is a hard enough place to grow wine grapes at the best of times. If you take away the crutches of convenience viticulture, everything collapses into a mess of underripe, rot-infested fruit.

Where this belief originates from is anyone’s guess. Globally, the roll call of major organic producers includes the likes of Château Pontet-Canet in Bordeaux, Château Beaucastel in the Rhone, Bodegas Muga in Rioja, Albet i Noya in Catalunya, Avignonesi in Tuscany, Yalumba in the Barossa Valley and Frog’s Leap in California.

Reputations aside, organic wines have long been shown to outperform convenience wines in taste tests. A 2016 study published in the Journal of Wine Economics found that ecocertified Californian wines were consistently rated as higher quality than their convenience counterparts.

Meanwhile, back here in England, Will Davenport has been quietly astonishing people with his organic wines for nearly two decades. And again, much as we hate to burnish our own medals, we’re phenomenally proud of the many awards and glowing reviews we continue to receive for our wines.

With this knowledge in mind, maybe the embarrassed silence that so often surrounds organic wines – certainly English ones – isn’t embarrassment on our behalf at all. It’s every bit as common for people to feel sheepish about something they know they could and should be doing themselves, but aren’t.

If you want to read more about the ecological benefits of organic viticulture, and organic farming in general, the Soil Association website is well worth a look.